309Write - China's Mars rover touches down on the red planet

China's space program took a major leap today when it successfully landed the Zhurong rover on Mars, marking the country’s first landing on another planet. Teams will now prepare to roll the rover off its landing platform and onto the dusty Martian surface to begin a mission to search for evidence of water and hints of past life.

The touchdown makes China the second country in history to deposit a rover on the surface of Mars. After months in orbit around the red planet, the Tianwen-1 spacecraft released the Zhurong rover for a landing in Utopia Planitia, a vast plain that may once have been covered by an ancient Martian ocean. The 529-pound rover survived a perilous descent to the surface, including atmospheric entry, slowing from supersonic speeds with a parachute, and finally using retrorockets to safely alight on the ground. 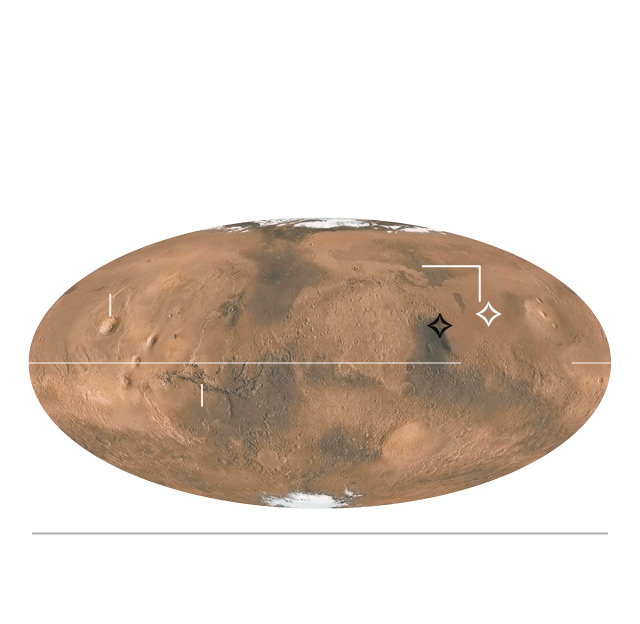 China’s Tianwen-1 is targeting the

as its landing site.

Named for an ancient Chinese fire god, the 529-pound Zhurong rover is similar in size to NASA’s Spirit and Opportunity rovers, which landed on the red planet in 2004 and sent back exciting images and data about the planet’s surface conditions. China’s rover could make additional important discoveries concerning water and past habitability on the planet, paving the way for future human missions to Mars.

“Landing safely on Mars is a huge challenge, especially for China's first soft landing attempt,” Long Xiao, a planetary scientist at the China University of Geosciences, said before the safe touchdown. “But it is a necessary step for Mars and deep-space exploration.”

Successfully descending to the surface of Mars is an extraordinary challenge. Before today, only NASA had safely landed and operated spacecraft on the Martian surface; in 1971, the Soviet Mars 3 lander transmitted half of a photo before falling silent about 100 seconds into the mission. By landing and roving on Mars, China jumps ahead of a number of spacefaring peers.

The Zhurong rover made it through the so-called “seven minutes of terror,” the time from atmospheric entry to landing on the surface. The China National Space Administration (CNSA) could only watch the autonomous landing unfold from nearly 200 million miles away—so far away that it takes 18 minutes to receive a signal from Mars—and hope everything went to plan.

Zhurong sat attached to its orbiter companion, encased in an aeroshell designed to protect the vehicle on its way through the Martian atmosphere. After it was released and endured a fiery atmospheric entry, a huge parachute deployed to further slow the rover’s descent.

Then a landing platform holding the rover fired up rocket engines to make the final descent to the surface. A laser range ﬁnder and 3D scanner provided altitude and terrain data while cameras were used to autonomously choose a place to land. 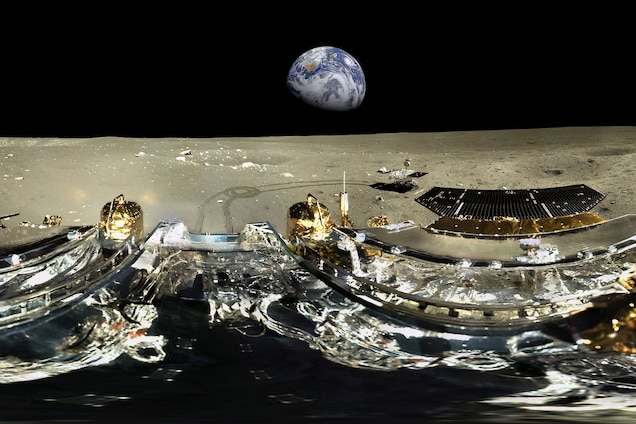 As part of its Chang'e-3 mission to the moon, China successfully set down a robotic lander and deployed its first lunar rover in 2013.

Mars is significantly harder to land on than the moon, says Michel Blanc at the Research Institute in Astrophysics and Planetology in France. But China has had a series of successful lunar missions that prepared it for a Mars landing. Chang’e-4, history’s first landing on the lunar far side in 2019, required “high technological capacity” in artificial intelligence and autonomous hazard avoidance, Blanc notes. As well, the rocket engines on Zhurong are similar to those China used to safely land three spacecraft on the moon.

Those technologies, along with the supersonic parachutes China has used to return astronauts from Earth orbit in space capsules, set up CNSA to pull off a Martian touchdown.

A new rover on Mars

Once Zhurong’s six wheels roll off the landing platform and onto the Martian dust, the rover will expand its foldable, butterfly-like solar panels and explore the area for a primary mission lasting three months. The vehicle could work well beyond this conservative goal however—the solar-powered Spirit and Opportunity rovers had primary missions of about 90 days, and they each ended up exploring Mars for years.

Utopia Planitia, thought to be the site of an ancient sea, has sedimentary layers that could contain evidence of past water. Even more exciting, these layers of rock could contain traces of any past life on Mars, says James Head III, a planetary scientist at Brown University.

“Because the pre-selected landing site is close to an ancient ocean shoreline, and distinct from others, the science data will uncover more secrets of Mars,” Long says. The site complements the research being carried out by NASA’s Curiosity and Perseverance rovers in the ancient lakes of Gale and Jezero craters, respectively, Head adds.

The Zhurong rover carries a suite of six instruments. A pair of panoramic cameras and a multispectral imager will provide information about the terrain and its composition, while an instrument with a laser will vaporize rocks to analyze their makeup, similar to the laser spectrometers aboard Curiosity and Perseverance. A magnetometer will measure magnetic fields in tandem with an instrument on the orbiter, and a climate station will measure the local atmosphere, temperature, pressure, wind, and sound on Mars.

One of the most exciting instruments aboard the rover, however, is a ground-penetrating radar, which will be used to search for pockets of water or ice below the surface. Head notes that NASA’s Viking 2 lander, which set down in a region slightly north of Zhurong’s landing site in 1975, imaged fascinating phenomena, including ice contractions and frosts on the surface of Mars, and polygon patterned terrain which may have been created by contractions of subsurface ice with changing seasons.

Zhurong’s ground-penetrating radar will ping the surface with two different frequencies and pick up echo data from layers below, peering down to 33 feet to search for ices or briny waters underground.

“Tianwen-1 is likely to be able to explore and detect any subsurface snow and ice using its payload,” Head says. Such pockets of ice could prove valuable for future crewed missions, and any pockets of water or brine, shielded from radiation on the surface, may provide habitats for simple lifeforms.

The next chapter of Chinese space exploration

China will openly share the data from Tianwen-1 and Zhurong the same way it has shared data from its lunar exploration missions, Long says, benefiting planetary scientists around the world.

The mission will also set the stage for China’s next planned voyage to Mars—an audacious sample-return attempt scheduled to launch around 2028. Beyond Mars, the country has plans to launch a Jupiter probe, including a possible landing on the moon Callisto, to collect samples from a near-Earth asteroid, and to send a pair of Voyager-like spacecraft toward the edges of the solar system.

“In the age of ocean exploration, China has a history of Zheng He's voyages to Southeast Asia and Africa,” says Zhang Xiaoping, associate professor at the State Key Laboratory of Lunar and Planetary Sciences of the Macau University of Science and Technology, referring to early 15th-century expeditions. Zhang views China’s Mars mission as a continuation of these Ming Dynasty journeys.

Tianwen-1 and Zhurong, he says, are ”of great significance for studying the unknown universe, stimulating the scientific enthusiasm of young people, stimulating the creativity of the whole country, enhancing the ability to explore the unknown, and expanding the living space of humanity.”